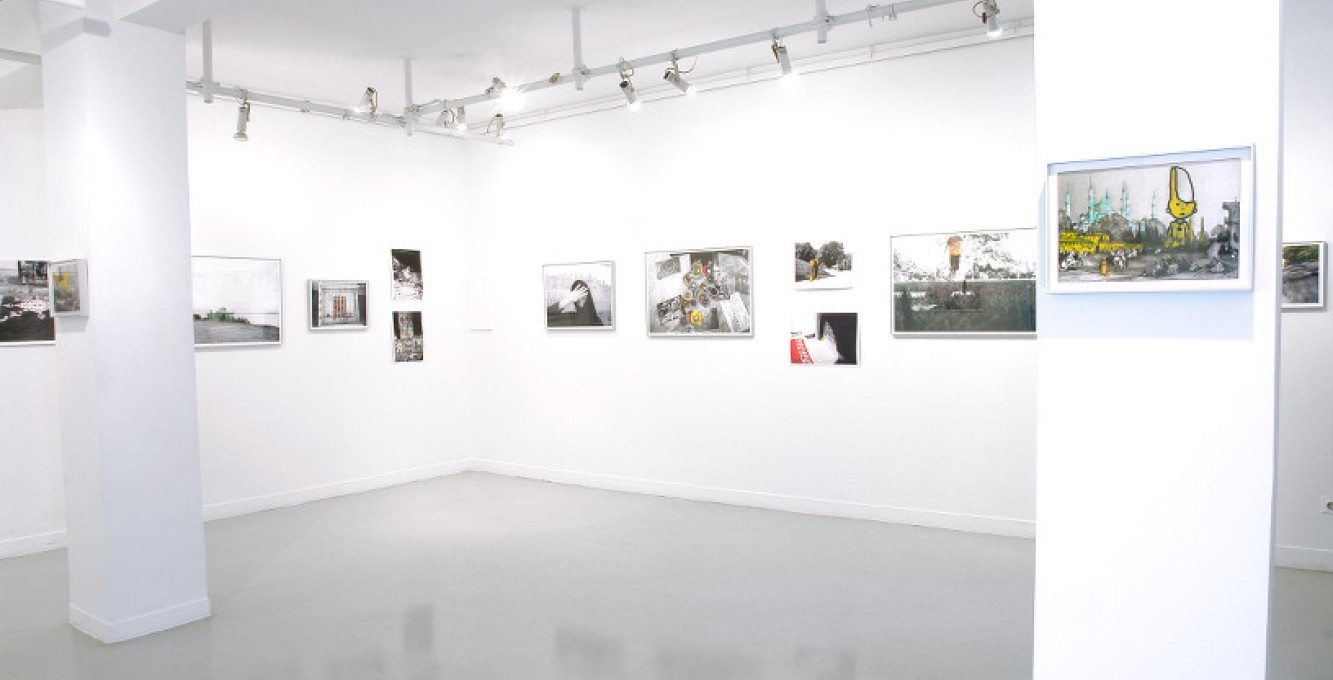 Eleni Koroneou Gallery is pleased to announce the third solo show of the artist Alexandros Georgiou with the title “Without my own vehicle.”

The exhibition “Without my own vehicle” at Eleni Koroneou Gallery, in May 2006 is the result of a long journey I made; April through August 2005.

But I should start with the first time the notion of doing this project came to my mind. It was in 2003, during my second visit to India. I ended up spending 3 months at Varanasi, the holy city of Siva, built on the west back of the Ganges (Ganga in Hindi) and it’s a unique place. I was swimming in the river daily in the morning and evenings. At 5:30 am in the morning and while in the water the sun would rise and I would say a little thank you to the sun, just like the hundreds of Indians who do this every morning as a ritual. They believe that the river Ganga is a Goddess that flows from heaven and so did I believe that Ganga must certainly be a goddess. You see, in the travel guide there is a whole page describing the Ganga at Varanasi and explaining basically that if you step into the river you may die! I don’t remember all the diseases they proclaim the river carries. The truth for me was that, exactly because I believed that Ganga is holy, it really had a holy effect on me. I felt “blessed” swimming in it. Everyday I stepped into the water and everyday I felt a weight being lifted off my chest. I would say a little prayer in the style of “please Ganga don’t give me any skin diseases” and get in. One day, while I was crossing the river, swimming to the bank across -now a golden desert since the water was low and a vast area of sand was facing the sun- while I was thus swimming, I realized that that is what spirituality is all about: just because I believed in it, I was not affected by the guide book’s forebodings. I thought this notion of spirituality I should share. The notion that spirituality is the effort to act against what seems normal -usually full of fear and mistrust- and to apply a healing affect to what is seen by our ‘developed’ conditioned eyes as negative.

Finally, and two years after, the thought was still in my mind and I got this idea: I asked several people who support the arts and were familiar with my work to sponsor a new trip; this time I would go to Varanasi by land, crossing the borders of Turkey, Iran and Pakistan. I would mail things I found of interest throughout the trip. From postcards, to black and white Xerox of pictures I took and which I colored over, or music and poetry, things you wouldn’t find in a travel book, not touristic but personal, fused with the sense of what I experienced. Every one or two days I would prepare something for them. I felt I was connected with these people with invisible threads and I was moving along my path with the guidance of the material I was sending them. I tried to do just what I liked, which sometimes was small and maybe one would have passed it by without noticing. In my mind I was creating some ‘new’ kind of relationship. Every one of them of course felt something different and that’s why I find important in the small catalogue we prepared for the show to have included the thoughts of the people who participated. The main reason why I want to have a book made and do the show is that I want to inspire people to experience without fear a different approach of life, one not so materialistic and inhumane. The honest truth is that I feel the West is rushing towards a horrible future and unhappiness has become a norm regulated by pills. I do not want to accept this as the future; and I want to think that ‘Without my own vehicle’ offers the proof of a different approach, which could be inspiring.