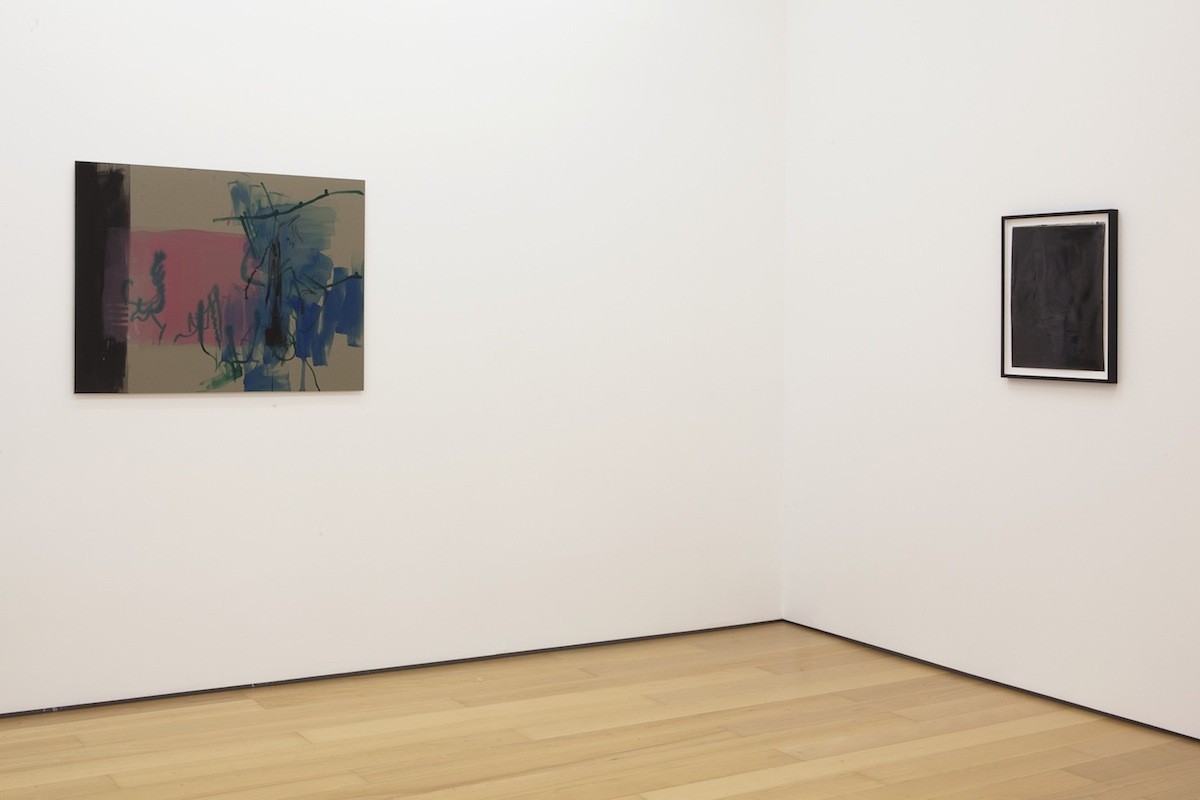 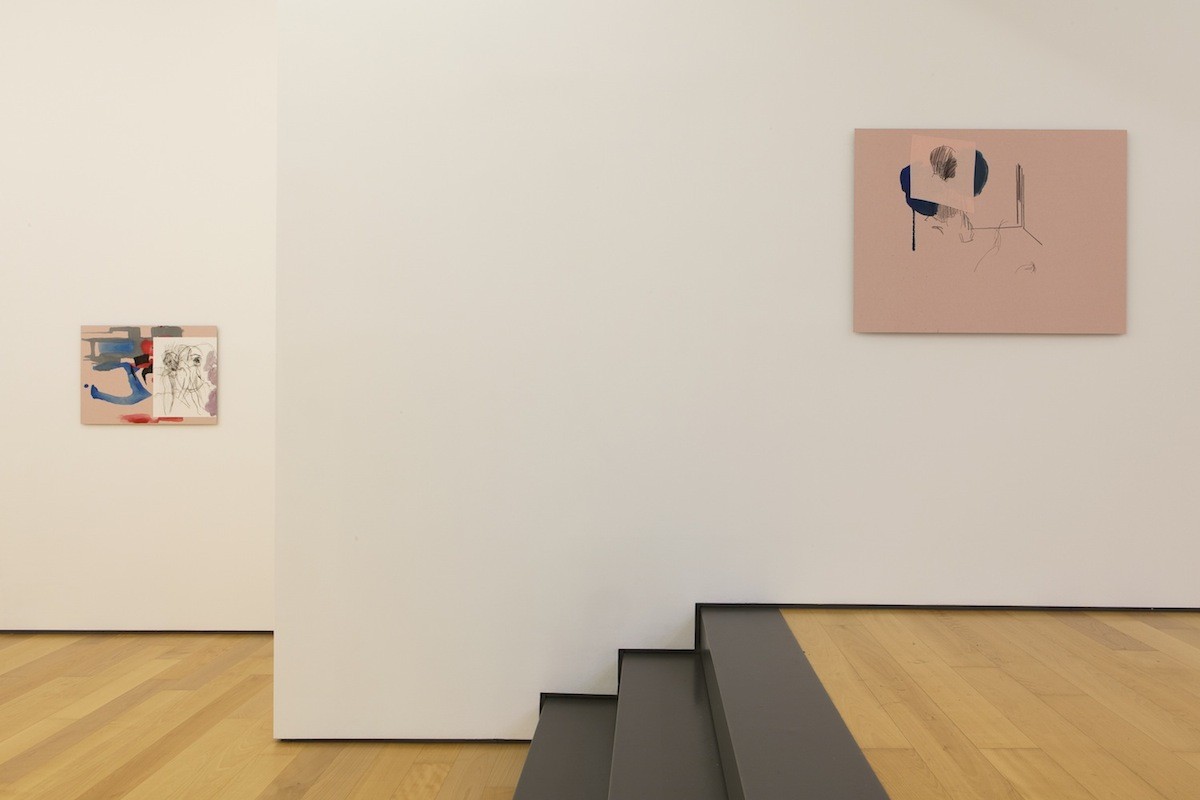 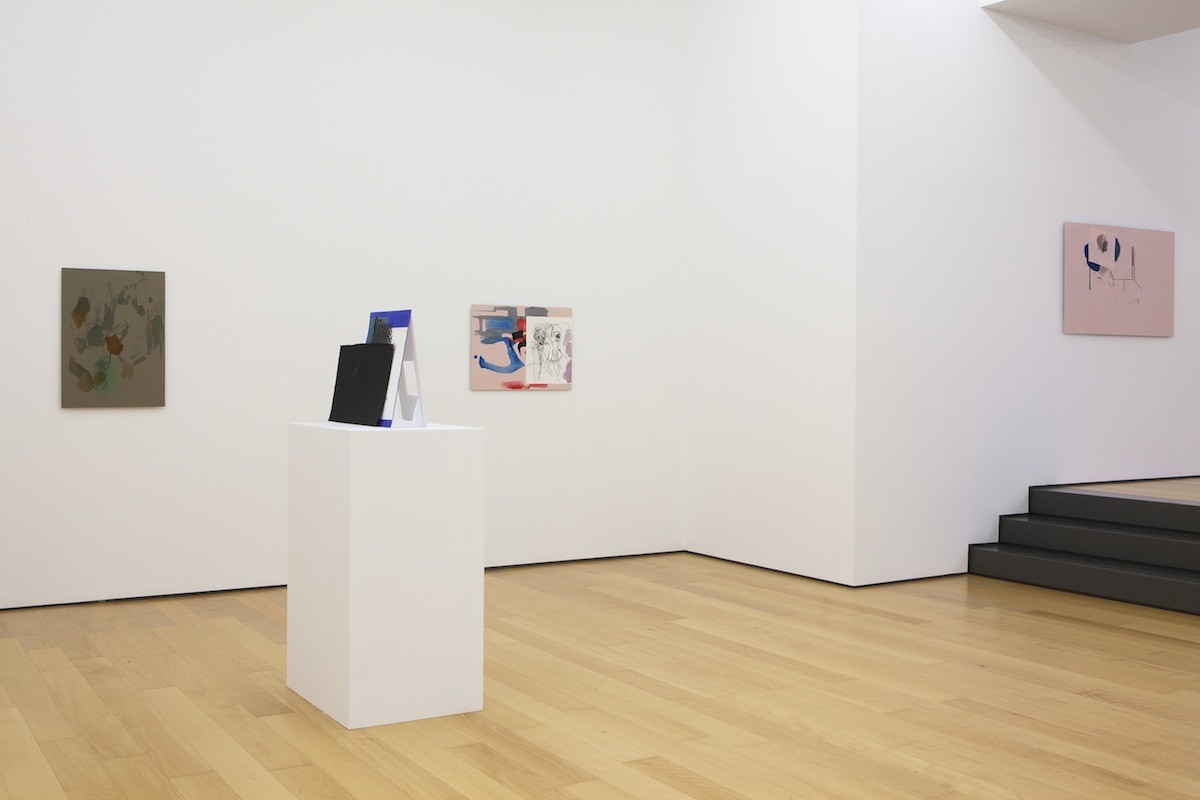 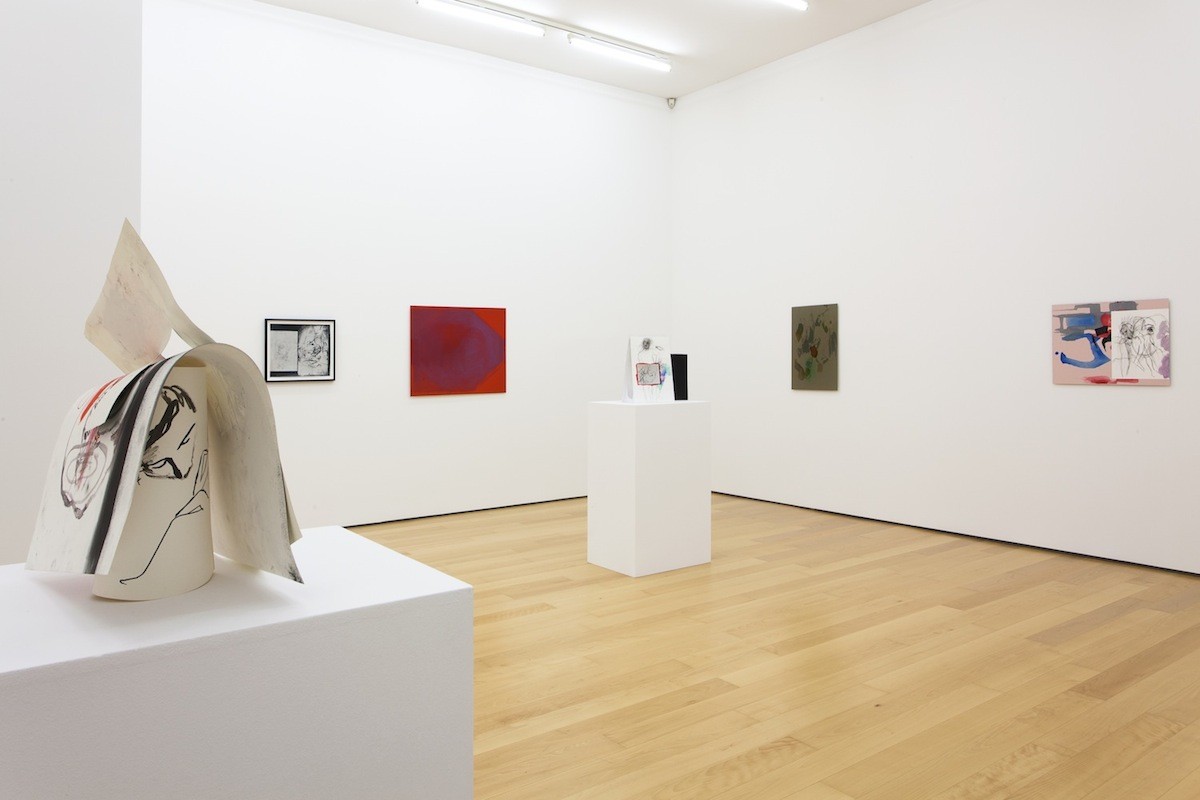 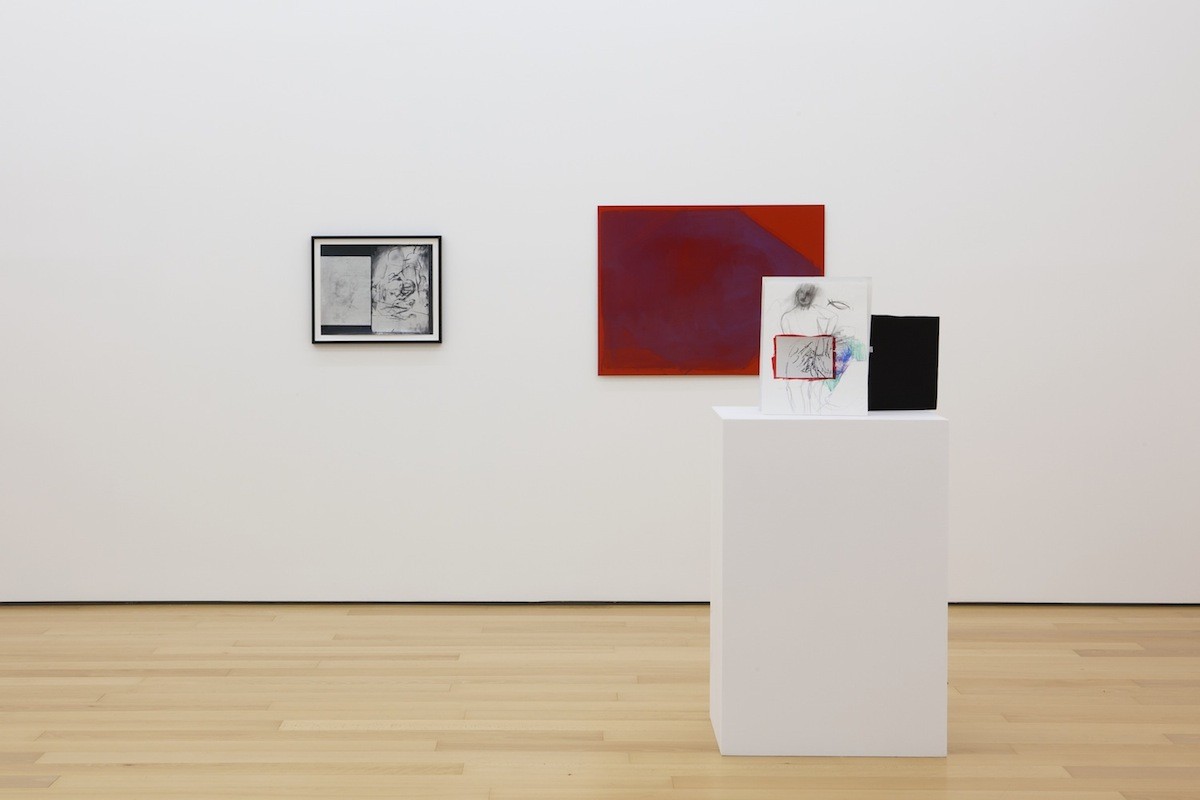 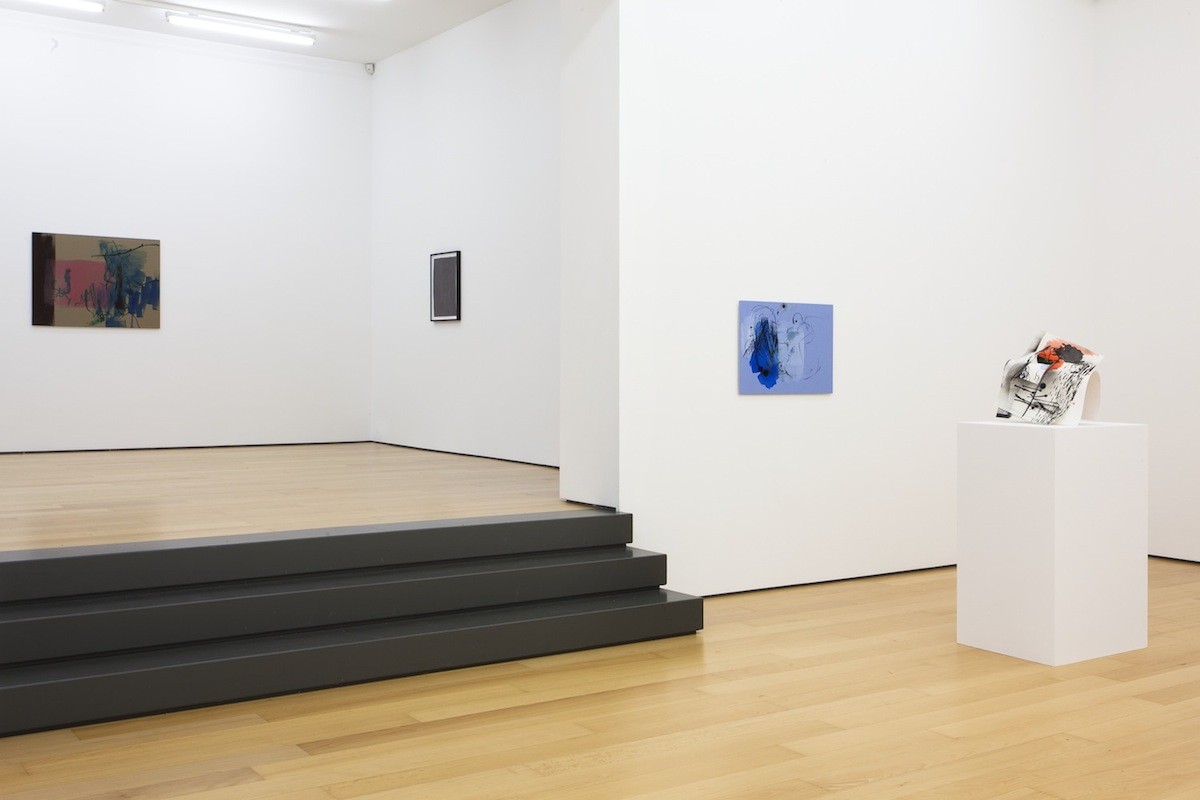 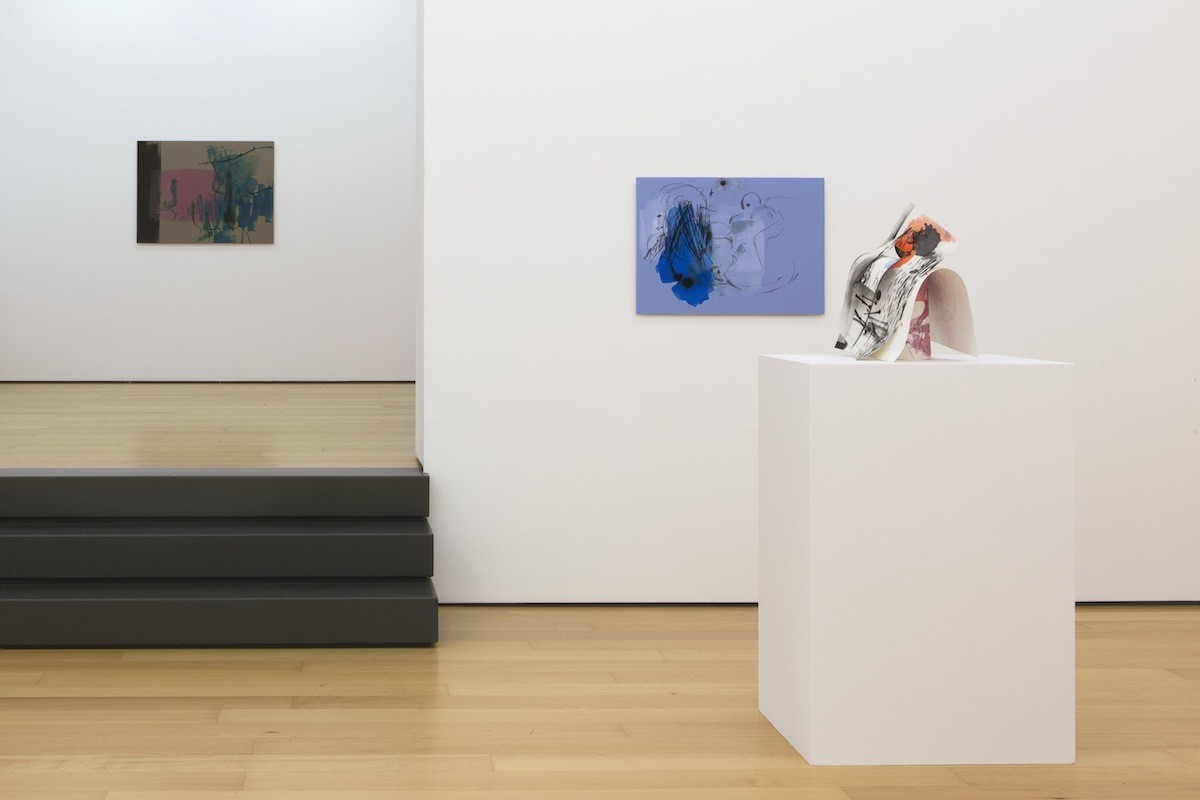 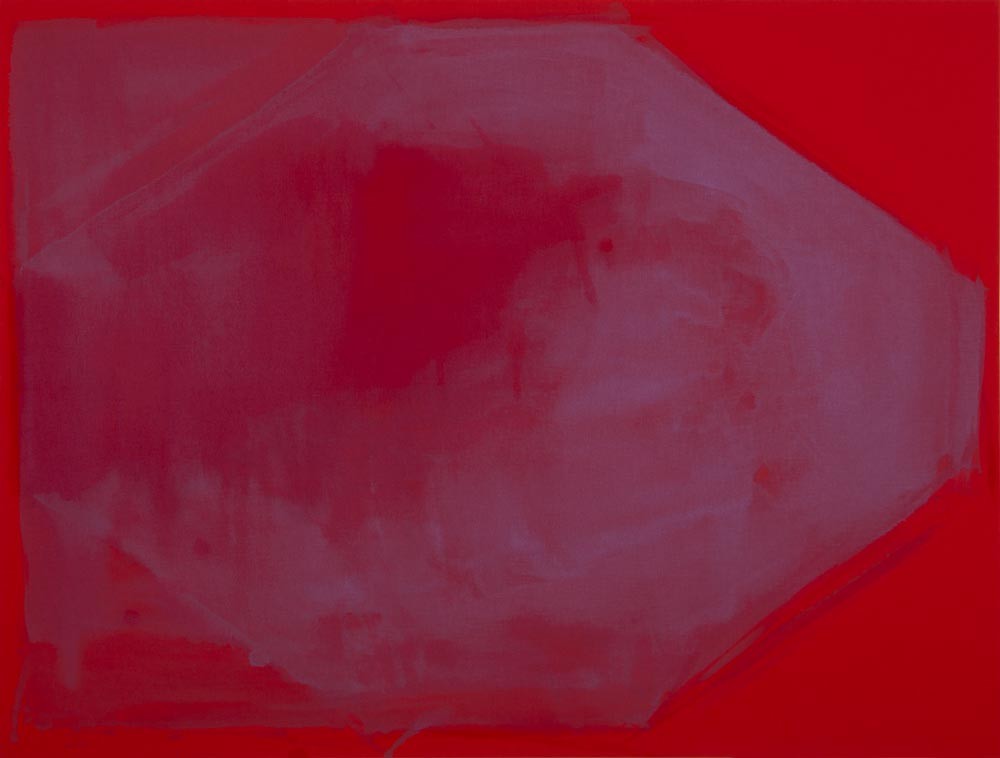 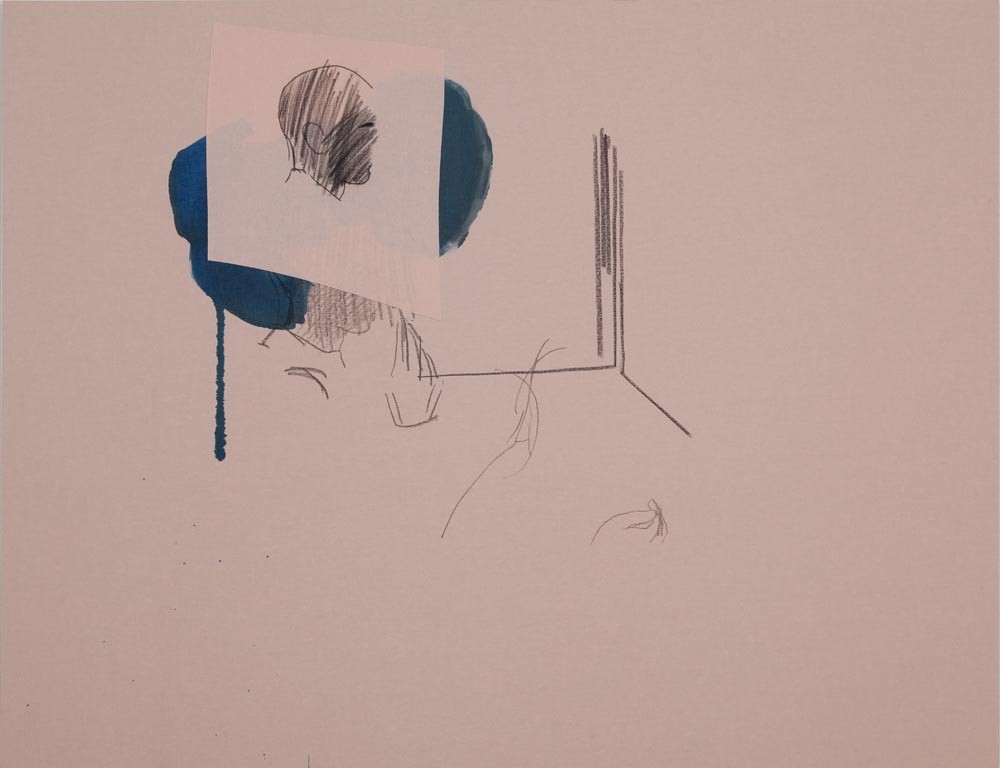 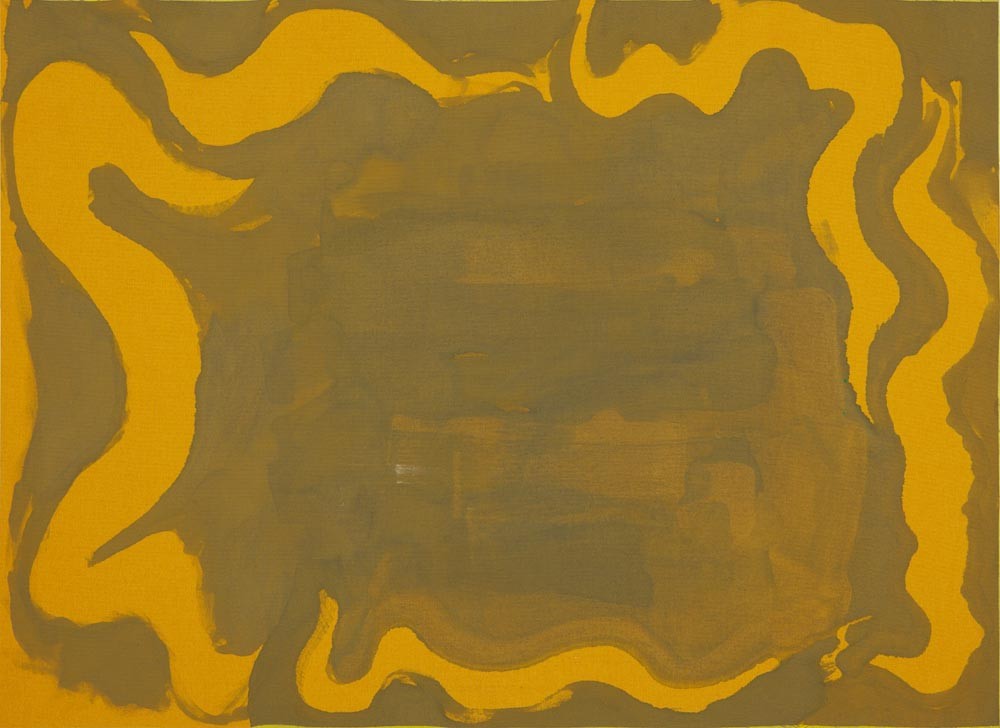 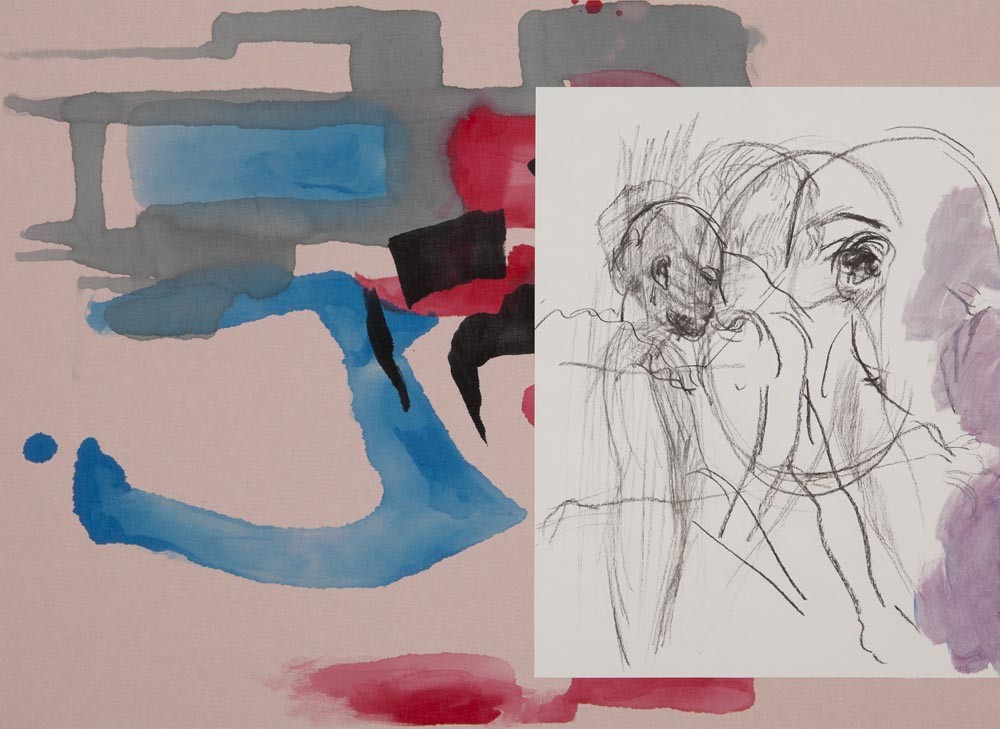 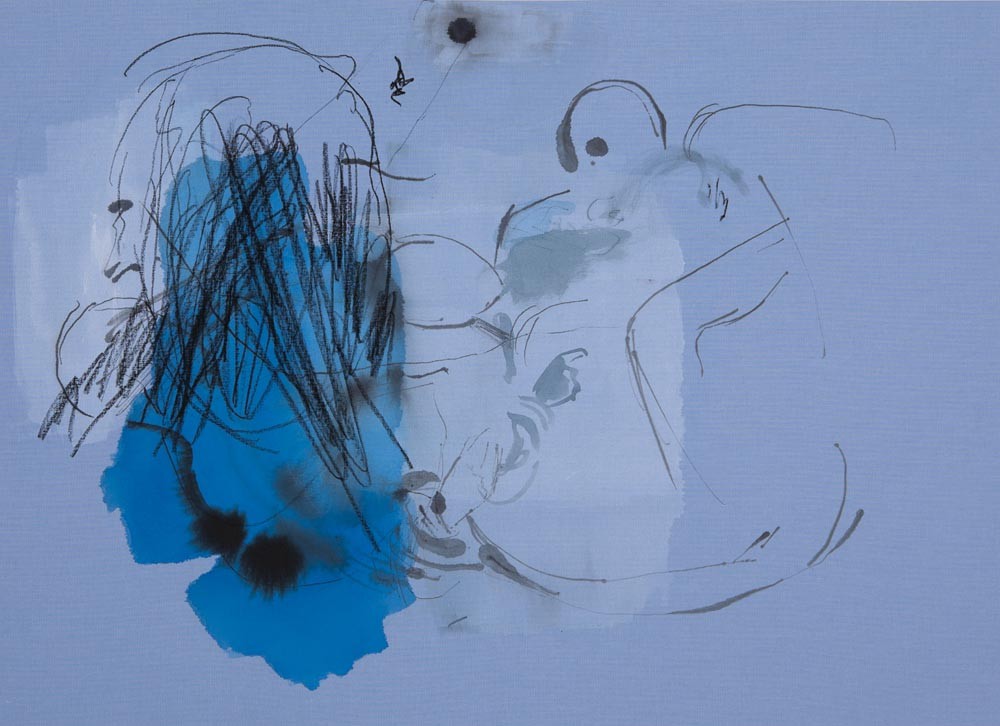 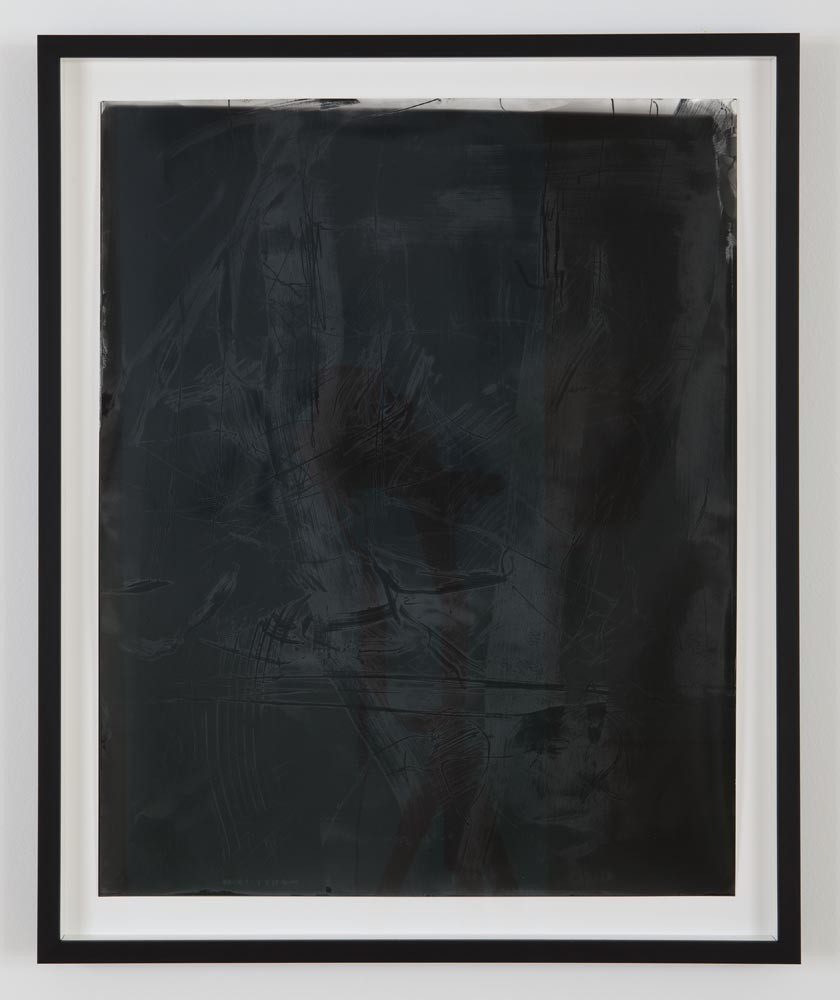 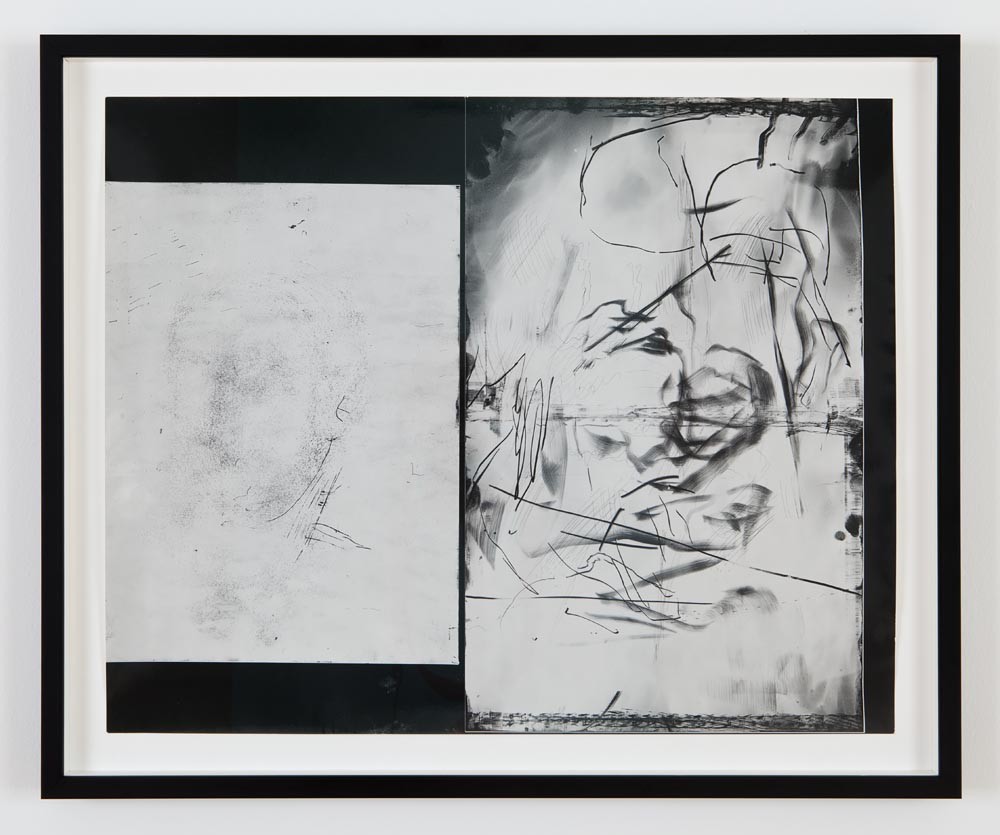 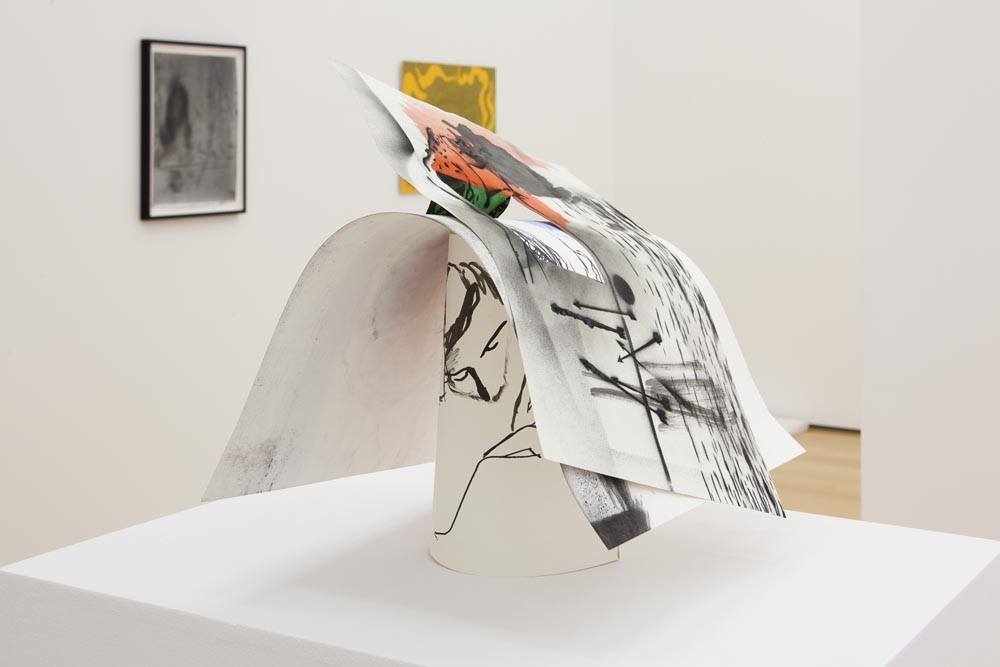 Eleni Koroneou Gallery is pleased to present the first solo exhibition of Nick Mauss at the gallery. The artist will be present during the opening reception, Friday September 25, 2015, 8-10p.m.

Nick Mauss’ diverse artistic practice encompasses drawing, sculpture and performance along with some curatorial projects that he initiated in the last years. Mauss’ oeuvre is characterised by a perpetual state of indeterminacy, in a need of thinking about drawing and painting in an expansive sense. His work is a premeditated confusion where definitive shapes and forms are overlooked in favour of ambiguous semblances, while the use of various media and the titles of his work further add to the transient, ephemeral and contingent nature of the works.

For this exhibition, Mauss created a new body of work, consisting of drawings on fabric that are mounted on aluminum. The fabric is either used as a support for his charcoal/ink/pastel drawings or in other cases the fabric support itself is collaged, so that the drawing and the coloring seem to come apart, like a mis-aligned print. Taking into account the distinct materiality of fabric and its ability of absorbing as well the paint as the light - in a different way than for example paper - it creates a smooth surface for the drawing to be revealed. Also on view are some prints from smoked glass negatives made by an early photographic technique called cliché verre, where every line or mark, including incidental marks, registers on the final print as an accumulation. In addition to that Mauss intervened in the gallery space by creating some free-standing model-like works out of paper, drawings and photographs, that function sculpturally, caught between being hung and being left behind. Mauss encourages the viewer to approach his artworks through an individual visualisation and input by drawing personal paths and filling in the illusory blank spaces of the gallery.

Nick Mauss was born in 1980 in New York. He lives and works in New York and Berlin. In 2015 a launch of Nick Mauss and Ken Okiishi's Artist Web Project was inaugurated for the Dia Art Foundation. He also staged the performance “1NVERS1ONS” working with the Northern Ballet and the National Youth Ballet, and a performance of texts and music by Kim Gordon and Juliana Huxtable, as part of Frieze Projects, London. An artist's book has been created to accompany this work. Other recent solo presentations of his works were realized at: 303 Gallery, New York (2015); Art Basel Unlimited, Basel (2014); Bergen Kunsthall, Norway (2014); Fiorucci Art Trust, London (2014); Κim?, Riga (2012) and Indipendenza Studio, Rome (2012). Mauss was included in the Whitney Biennial in 2012 and Greater New York, MoMA PS1 in 2010, and has participated in group exhibitions at institutions including: “Portraits d'Intérieurs”, Nouveau Musée National de Monaco (2014), “Florine Stettheimer retrospective”, Lenbachhaus, Munich (2014), Kunsthaus Bregenz (2013); The Walker Art Center (2011); The Hessel Museum of Art, Bard Center for Curatorial Studies (2010); Kunsthalle Basel (2010); Kunsthalle Zurich (2009) and Le Magasin, Grenoble (2008).