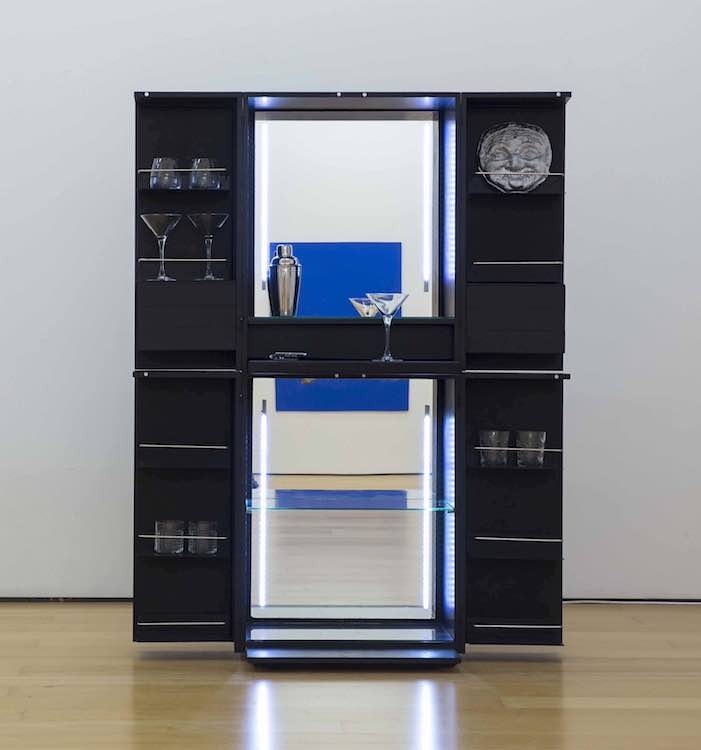 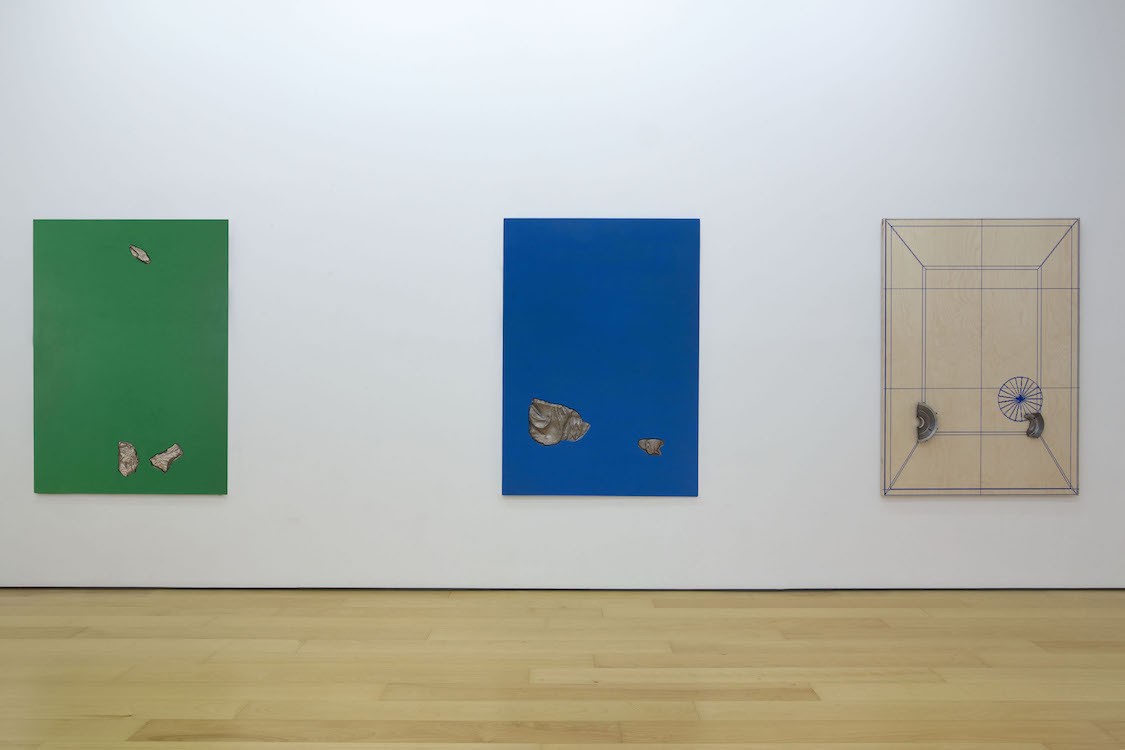 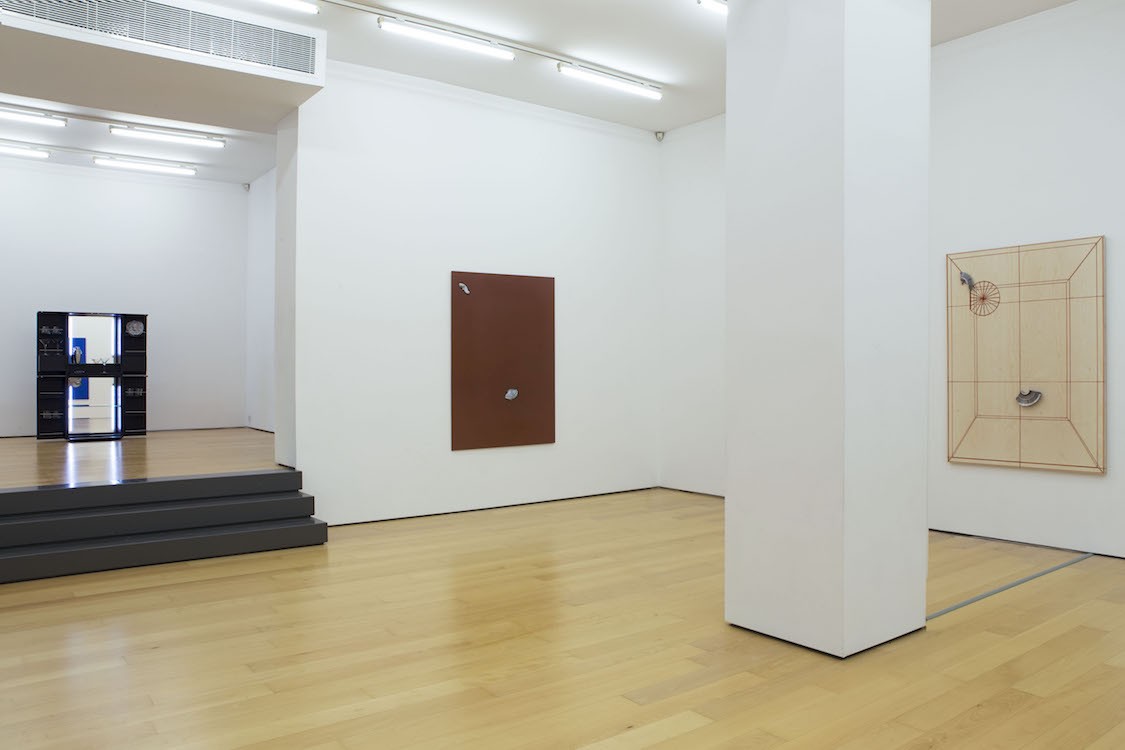 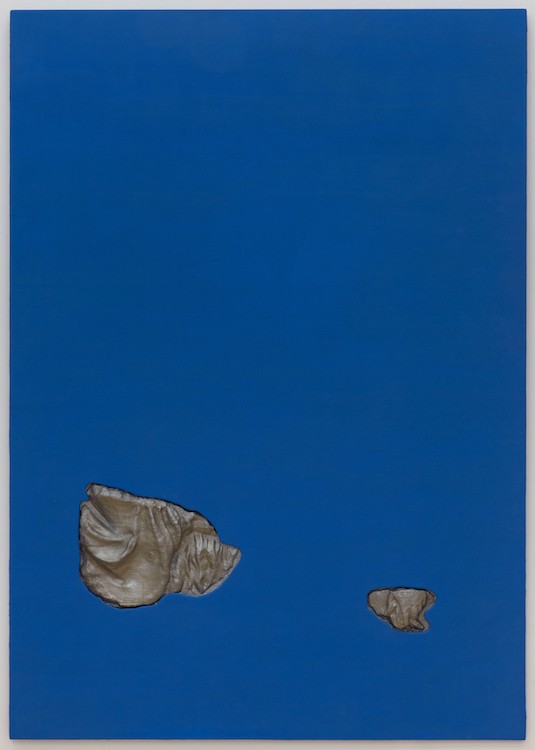 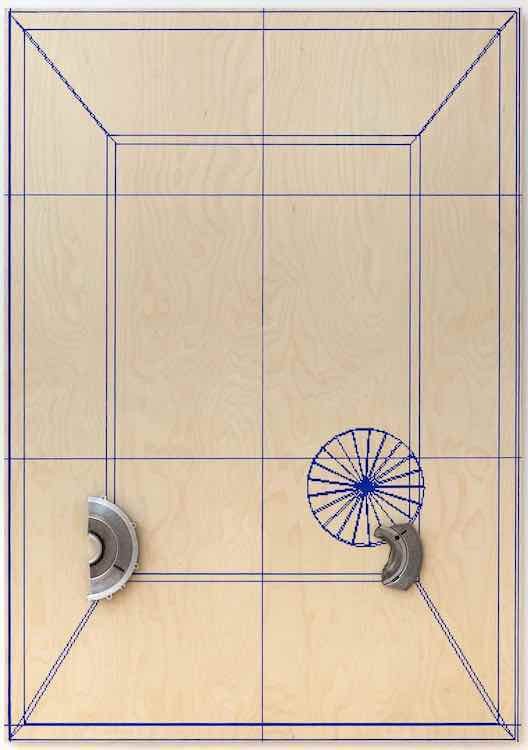 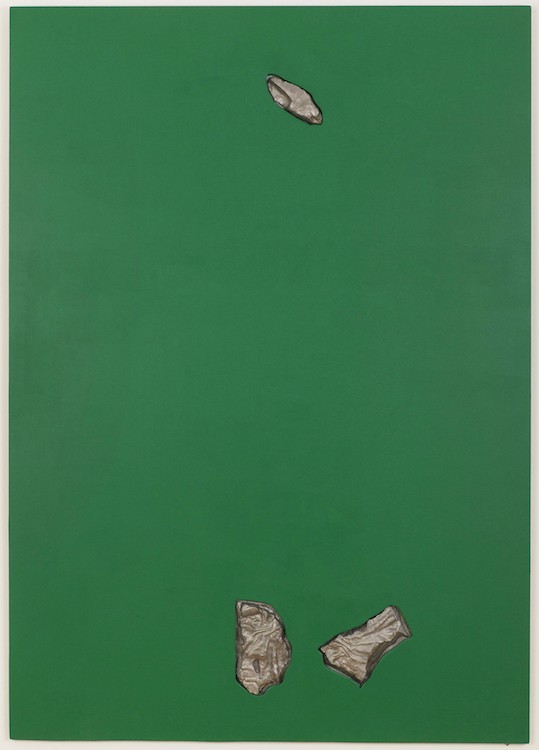 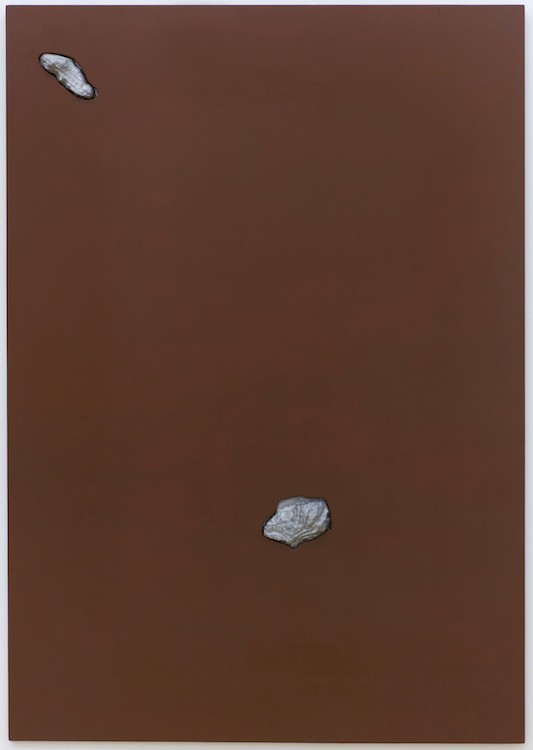 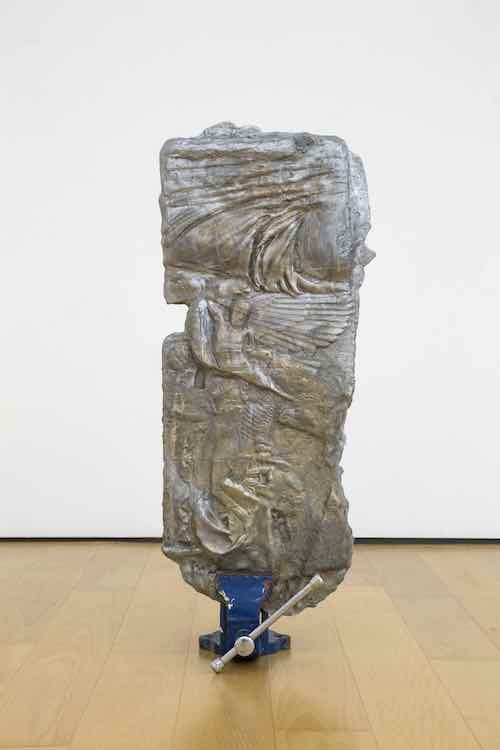 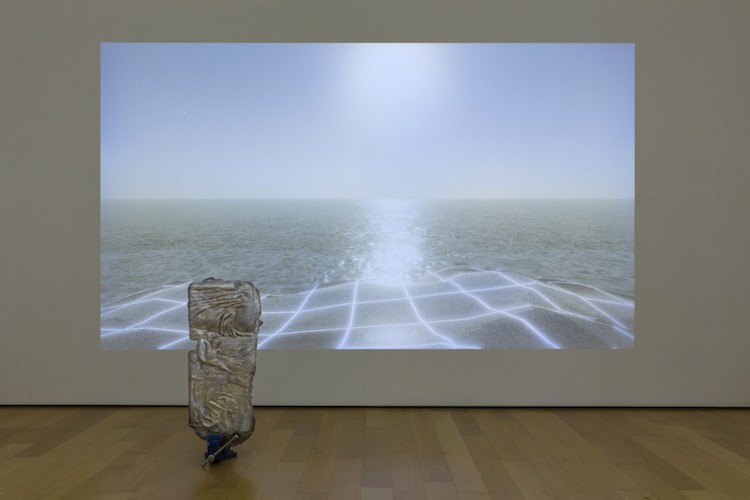 The main body of works presented in the show consists of a series of six monochrome paintings in two parts, where the past is cited to modern life. In the three paintings of the first part, the use of one acrylic colour over the entire plywood is intervened by embedded casted aluminium reliefs. The artist uses techniques and practises like, 3D reconstruction, 3D fabrication and default machine learning algorithms to define his final colour palette. Giannakis renarrates, reconstructs and modifies forms and stories, myths that have shaped the collective human race for millennia inside a flow space and time. In the second part, the other three paintings act as a twisted mirror. Acrylics on plywood and metallic fragments of used mechanical parts, give the impression of a window, a room, an area of interest, which the objects are going to be rendered. Here the artist paints his computer screen viewport on the plywood so that inclined lines appear inappropriately jagged.

Among the works on display is a real time rendering video projection of an endless day and night cycle. The viewer is confronted with a sunset/sunrise on a grid line landform alongside an infinite ocean. A memory palace to store information, a virtual mnemonic device involving the creation of a visual map of one's place, that is not place, really, but it is real. In front of the video projection stands an aluminium sculpture held on a metalworking vise. With the use of digital sculpting tools, 3D fabrication and mining technologies, the artist separates stories from a interconnected network, from multitude of sources, creating something new that has been incorporated out of them.

A final work, perhaps the most complex on view, belongs to neither series but rather suggests an enclosure summation by combining elements of all. A server, a cabinet bar, is a composition of a farewell electronic note on a shield screen (an electronic encapsulation of the Neuromancer novel in a microcontroller), a heritage cocktail, fuel to hijack consciousness and lastly an aluminium apotropaic mask of the Gorgoneion, a protective symbol.

Theodoros Giannakis (Preveza, Greece, 1979) has graduated from the Athens School of Fine Arts in 2009 and the London Metropolitan in 2011 with an MA in Digital Media Management. He is a member of the KERNEL artistic group and a PhD candidate in the Visual Arts Department of the ASFA. Recent selected shows include: “2018 Triennial: Songs for Sabotage” – New Museum, New York. “Driftwood, or how we surfaced through currents” – Fondazione Prada, Athens. “Roy Da Prince” – Centre For Contemporary Art Futura, Prague. “The Equilibrists” – Benaki Museum, Athens. “Handsome, Young and Unemployed” – KOMPLOT, Brussels, “Afresh: A New Generation of Greek Artists”, EMST, National Museum of Contemporary Art, Athens.

I was no longer me, I was with no memory, I was someone else and yet, it was on this account that I became properly myself. Those no-memories, those nurturing memories, I might name them after the title Primitivism Mirage, or after what I am. What I have become. Maybe you are watching now. Or maybe you are plugged-in, thinking that you are watching the show. Just one more moment, not all spaces are similar or equal, It is a sideway glance, a journey to a tragic realization. A super-positioned entity, which exist in itself, as reality exists in itself, as a virtual space exists in itself.
Speculating on the content of the self-enclosed act of communication exchanges (running to and from) that we have generated between ‘ourselves’ and the ‘primitive’, we can speculate the locus where Western thought has collapsed upon itself. The source of myself as a subject in a culture dedicated to the mastery of a mirage. Speculating on this mirage will undoubtedly one day come to be seen as the latest, open beta-version cycle of an old myth.
Well, that journey started again, within the aphotic end of the savage night, plugging-in again, into the very bedrock of the psychophysical data-continuity of the cyber-tragic four-dimensional human. Accessing the web, sending emails across the planet, constructing simulations, having affinity with artificial intelligences and that feeling that I have built -only as an intellectual bricoleur can do- a new space teaming with the reconstructed myths that have shaped the collective human race for millennia, again and again.