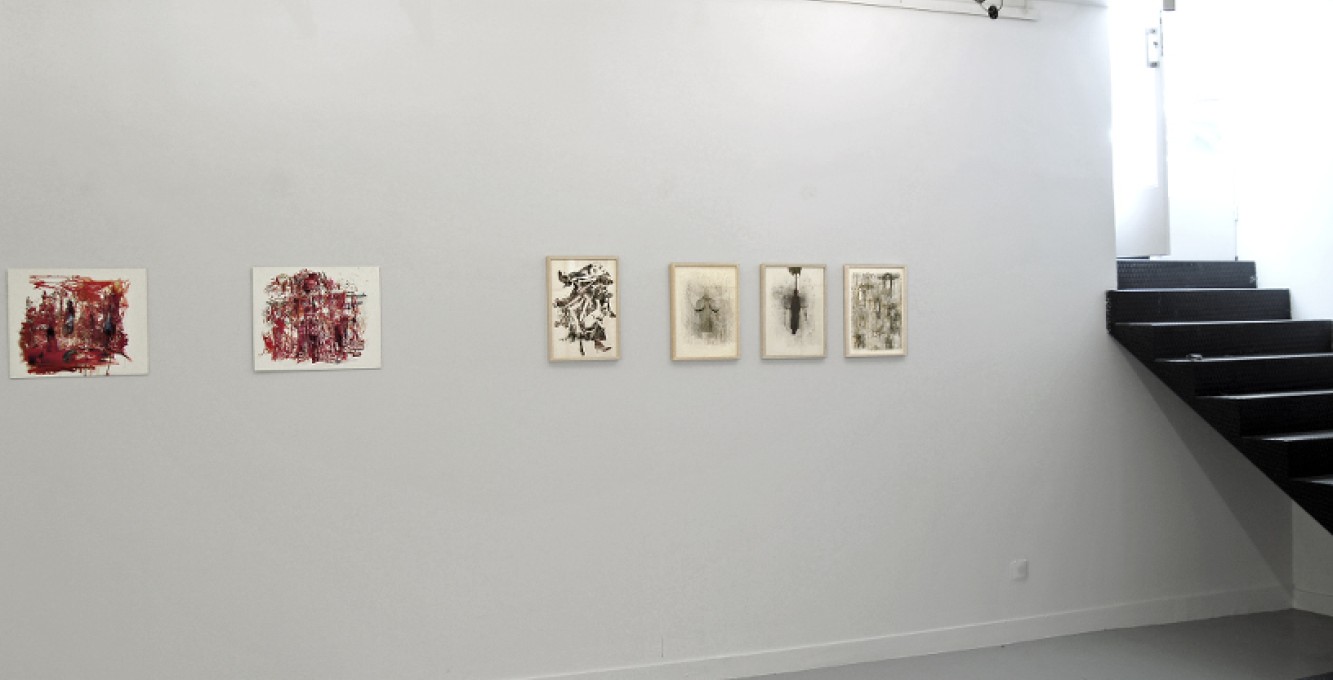 Eleni Koroneou Gallery is pleased to announce the group exhibition with the title “The harder you look”. The exhibition focuses on works on paper from artists from different countries (Lettland, Germany, Greece, Brazil, China) with different cultural tradition. The artists have in common the search of images, which they discover in the press, in the flea markets and in the streets. Intervening dynamically in these images they erase them or they represent them, giving the viewer the possibility, the harder he looks at them, the more he discovers.

Aidas Bareikis was born 1967 in Vinius of Lettland. In the tradition of artists such as Dieter Roth, Bareikis is an archiver of throw-away items. His constructions are made entirely of things found discarded on the street or purchased at ubiquitous 99-cent stores, flea markets and thrift shops. He chooses objects that "look weird but also betray a certain cruel exploitation in their purpose or in the way that they were manufactured", Bareikis states. The current exhibition will present collages with a complicated narrative form.

John Bock was born 1965 in Gribborn in Germany. John Bock chooses the form of lectures as artistic medium. He tries to transpose simple structures from life and artistic tasks into abstract formulae and absurd models. Psychological coping strategies for life are analyzed with mathematical methods and transferred into models of society. In his lectures, Bock combines language, dramatic elements and sculptural objects. He acts on "stages" built from tables, cupboards or multi-level wood constructions. The objects are handmade or re-modeled accessories of the lecture, made out of clothing, electrical equipment such as hoovers and mixers, or "plastic diagrams" that illustrate his mathematical explanations. After the lecture, they are left on the stage which thus forms a "theatrical collage". Bocks work includes collage and drawings, which funtion mostly as studies for his lectures – performances.

Yuzheng Cheng was born 1977 in Suzhou in China. Collecting images from the flee- market, like old postcards from the 50s to the 70s with images from German landscapes as the Blackforest, etiquettes from consuming products, old family photographs and choosing photographs from newspapers and magazines he transforms this material to painting. Yuzheng questions the elementary means of painting and in accordance with the pictorial his paintings enable a clearer view of the real world by turning it into a painterly reality.

The German artist Jonas Lipps works with watercolors in various formats, though rarely extending beyond A4.They refer to remembered and sometimes previously photographed situations, constructed images, butalso elements from public image-banks such as newspaper photos or advertisements and are presented in rows, or in loose organisation on a wall.All the genres seem to be included: landscape, portrait, still life, and at the same time none of these, since the thing represented is, though recognizable, never physical, or tangible, or object-like. When using photographic sources, particular parts are emphasized by the tracing of contours, subsequently covered with transparent layers of paint.

The work of the German artist Helmut Middendorf is generally based on the effort to reverse some stereotypes and to search for new ways of expression. In his Middendorfs’ work composition, abstraction and humor could be seen as its main characteristics. He paints with many color layers, abstract structures, he sheds the colors, projects slides on the canvas, works with lines or blots that cover each other and react. In the paintings of Helmut Middendorf dominate bright and intensive colors and the observer could recognize the technique of "Multiprojection" with which the artist composes multilevel layers. In the current show Middendorf will present a series of watercolors, mainly portraits. The main characteristic of these works is their critical mood in a sarcastic way.

Eftihis Patsourakis uses varius materials to produce art works in different media (Painting, photography, installation). His work explores issues like memory, the reflection of space and time, of the human gleam in space and the relationship between the physical, spiritual and social enviroment.
Creating small variations (through repetition, reflection, use of light) to his materials and their subject matter, his work creates new structures that subvert and redefine the prototypes and at the same time they question issues about society, culture and philosophy.
In the exhibition "the harder you look" Patsourakis uses as underlayment photographs that he collects in flee markets and present meetings of people. In these photographs the painting process “writes” erasing the human gleams, trying to explore the process of memory.

The works of Lila Polenaki mostly brightly colored are layered surfaces made of all kind of materials, mostly textiles and paint but also paper, photographs, postcards and newspaper clippings, combining to produce a pleasingly bold visual effect., using the technique of collage They are her own visual diary and items that Polenaki amassed over the years. In Polenaki’s drawings, forms and shapes, faces and figures, chosen and cut with the scissor carefully, as a drawing tool, appear on the paper as positive or negative prints.

Tunga was born 1952 in Rio de Janeiro in Brazil. Using poetry, sculpture, performance, installation and video, Tunga’s work brings dreamlike forms to life. Inspired by his own mythology, the artist creates artworks that recall the ancient ritualistic practices of lost civilizations. Using nude performers to hypnotically interact with the objects, Tunga’s work always relates to performance. In this way, his work follows ceremonial envoroments and repeated use of symbolic materials. The current exhibition shows drawings which portrays the contures of sculptures of female figures that Tunga used for a performance made in 2000.