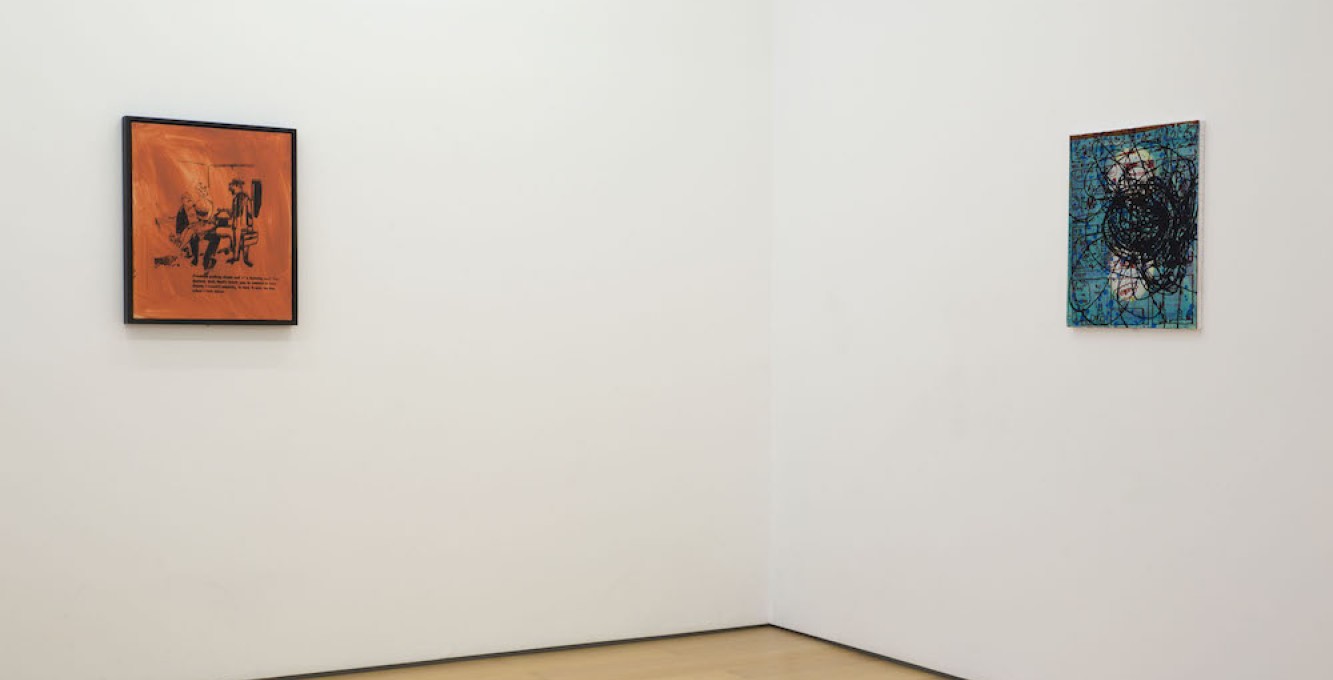 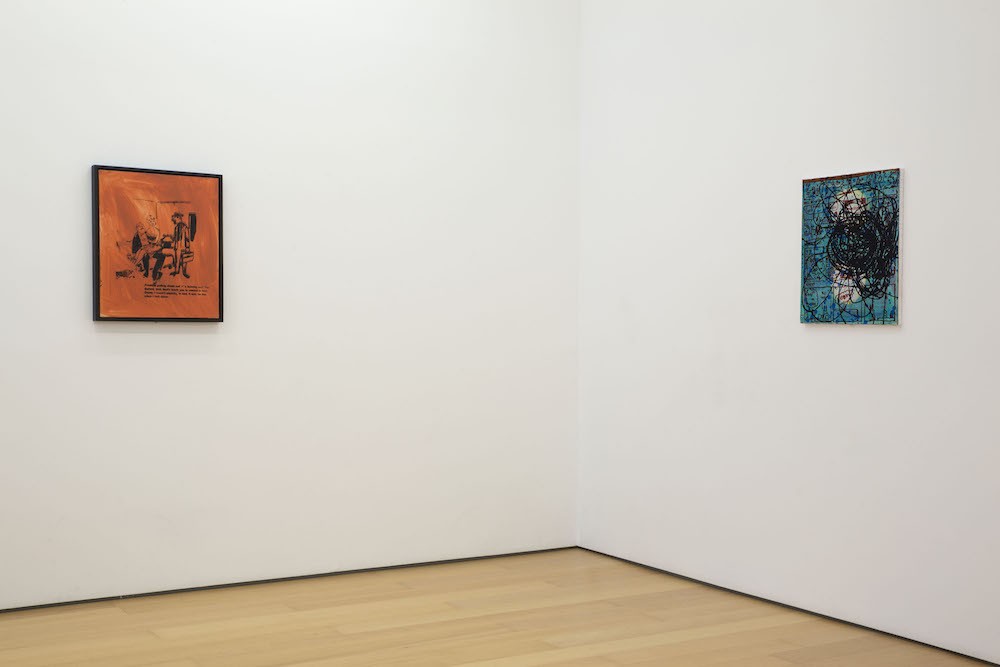 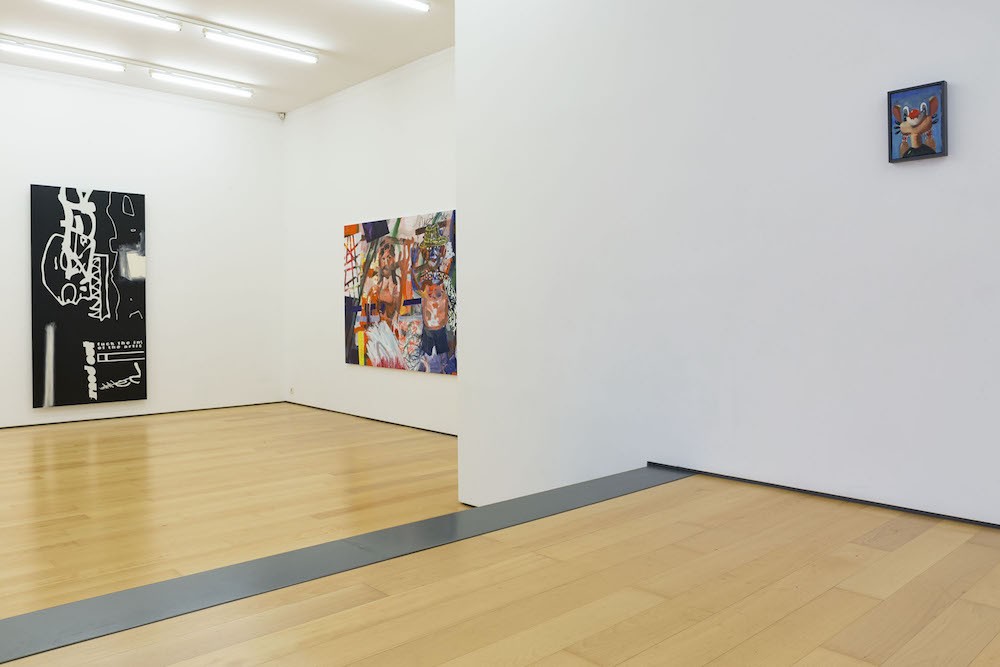 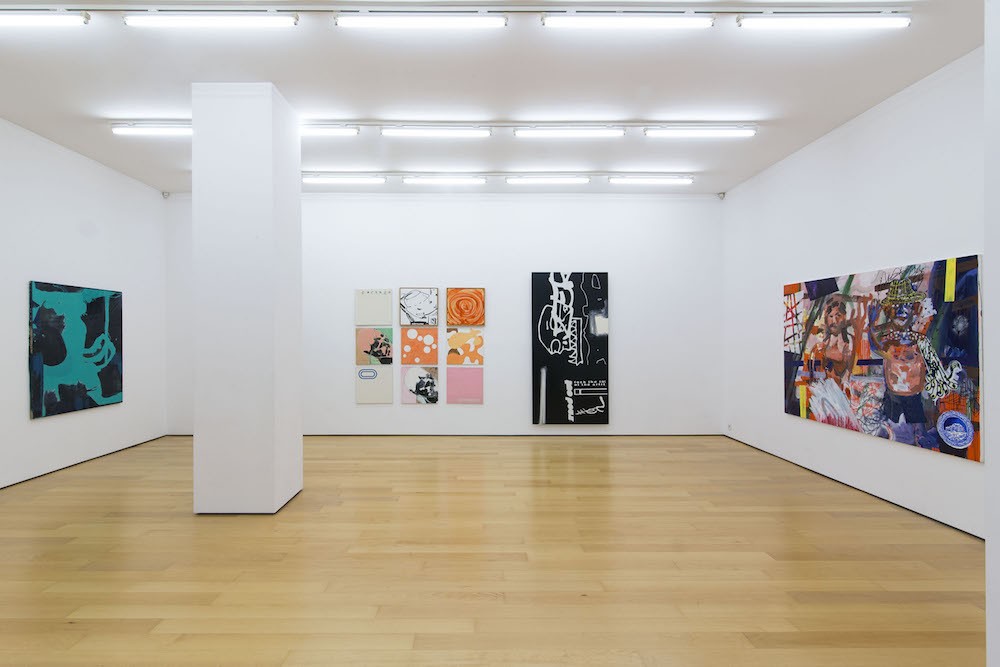 George Condo was born in 1957 in Concord (New Hampshire); he lives and works in New York. Condo has continued through the years to explore the realm of portraiture in his own highly original and distinctive manner. Beginning with his clown paintings in the early 80’s, Condo’s investigation into this genre reflected a highly unconventional approach to portraiture based upon imagination and memory as opposed to found or appropriated source material. The imaginary portrait became, through Condo’s eyes, a springboard for the development of an entirely new language of portraiture. While simultaneously drawing upon traditional techniques of oil painting, Condo imbued his subjects with a psychological complexity quite unique in the realm of the portrait.

Liam Everett was born in 1973 in Rochester (NY); he currently lives and works in San Francisco. His painting practice revolves around a series of questions concerning systems of support, threshold points, integration and transparency. Elements of the archaic, the primordial and crude alchemy have also found a key role in developing this material which consists of what Everett refers to as ‘screen’ paintings. The working reference directly calls attention to the two-dimensionality of the painting, which has the potential to function as a filter, in which light, air and other various phenomena are allowed to come forth. His paintings undergo an intense process of additive and subtractive applications. They are also exposed directly to the sun, wind, salt and alcohol in an effort to disturb and destabilize their structural integrity.

Alex Hubbard was born in 1975 in Oregon; he currently lives and works in LA. In the current show he is presenting a painting that is created through the enlargement of ink renderings, its transferal to linen panels, and the application of poured and painted urethane and fiberglass; an operation which alternates the works orientation from the floor to an upright position. The use of vibrant colors and curved lines is characteristic in his works, composing painting-fields with irregular shapes that emphasize the density of the color that shifts on the canvas.

Michel Majerus’s (1967-2002) paintings refer to images that we have seen before. He appropriates history and reproduces its visual results. His motivation is the formation of a new artificial reality that exists in many different colors. His work also displayed an appreciation of the history of painting in the twentieth century, with references to work by artists such as Basqiat, Willem de Kooning, Cy Twombly, Gerhard Richter, Frank Stella and James Rosenquist, as well as the master of Pop art, Andy Warhol. In the show he is presenting 6 small scale paintings and an Aluminium plate.

Helmut Middendorf was born in 1953 in Dinklage, Germany; he currently lives and works in Berlin and Athens. For this show Middendorf is presenting two paintings in which composition, abstraction and humor could be seen as their main characteristics. The smaller work in the show is from the series “Context-Paintings”, which combines images from high and low culture (Dürer, Rembrandt, Goya, Daumier etc. Comics, cheap illustrations, jokes and scribbles) with abstract backgrounds, bright colours, patterns, dots, loops and free gestures. The works are painted collages, sometimes sarcastic, sometimes very serious. The second painting, titled “South”, is a self portrait of the artist reflecting on his summer holidays in Greece.

Richard Prince was born in 1949 in the Panama Canal Zone; he lives and works in New York. Richard Prince became known for working with the appropriated image. In the late 1970s and 1980s, Prince gained attention for re-photographing images found in magazines he came across. An avid collector and perceptive chronicler of American subcultures and vernaculars and their role in the construction of American identity, he has probed the depths of racism, sexism, and psychosis in mainstream humor. After his iconic series of photographs, in which Prince explored his conceptual strategy of appropriating imagery from advertising whilst referring to archetypes of the American dream, he became intrigued by the incorporation of jokes into his works, the so-called “Joke Paintings”, one of which will be shown here.