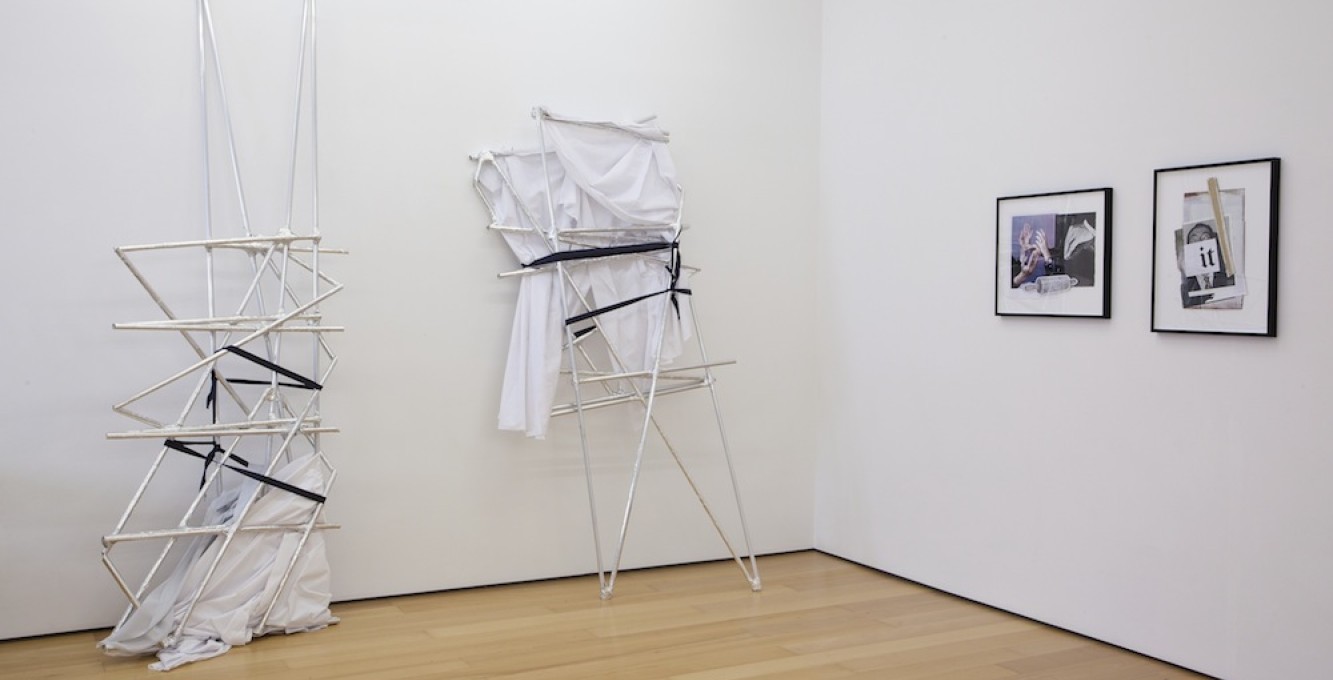 Liam Everett was born in 1973 in Rochester (NY); he currently lives and works in San Francisco. Everett's diverse practice encompasses painting, sculpture and performance, which reference multiple artistic influences including dance, theater, and philosophy. Everett's recent paintings are focused on what he refers to as "systems of support," in which the floor, wall and body are all implicated, collaborating within the mix of the visual dynamic. Everett uses non-traditional mediums such as salt, alcohol, and lemon, creating tension through limitations and at the same time entertaining the phenomenological and alchemical.

Michel Majerus’s (1967-2002) paintings refer to images that we have seen before. He appropriates history and reproduces its visual results. His motivation is the formation of a new artificial reality that exists in many different colors. His work also displayed an appreciation of the history of painting in the twentieth century, with references to work by artists such as Basqiat, Willem de Kooning, Cy Twombly, Gerhard Richter, Frank Stella and James Rosenquist, as well as the master of Pop art, Andy Warhol.

Christina Michalis was born in 1974 in Stuttgart, Germany; she currently lives and works in Berlin. In Michalis abstract works on canvas and polycarbonate plastic panels, the work becomes an object, which cannot be separated from space. Space, light and painting are connected to each other on a material level. Very important in her works is the liberation of the painting from the frame and its distance from the classical painting carrier. References to painting arise through the applied color on canvas and at the same time they are negated by the industrial plastic surface. The perceived picture is produced constantly new, through the reflections on the plastic panel and their play with colors, light and shadows.

Helmut Middendorf was born in 1953 in Dinklage, Germany; he currently lives and works in Berlin and Athens. For this show Middendorf is presenting 4 new collages along with a painting from the series of the so called PM – Paintings (PM for printed matter and pentimenti) that use collage but are mostly dominated by abstract overpainting. The collages are created from source material (photographs, newspaper material, magazine clippings, comics, cheap illustrations, pictures from the Internet) to be found in the artists’ studio often combined with painted parts. Carefully selected images are his starting point, but as collages they are enhanced or erased, cancelled or fortified. They combine images form high and low culture with painted parts, abstracting reality and recomposing it in a more illusionary way.

Jon Pestoni was born in 1969 in St. Helena, (CA); he lives and works in Los Angeles. Pestoni applies multiple layers of color in his paintings each one of them forming a story. The different layers of color sometimes obstruct and sometimes interplay with each other, composing a narrative that gets summarized at the center of the canvas. Scattered colors compressed under scribbles and irregular shapes are erased or disclosed. Τhe reading of each painting begins at the center, as the various layers unfold sequentially along the margins. The rich multi-layered paint surfaces indicate an aggression but also a harmony as the movement of the arm is almost visible on the canvas emphasizing the immediacy and spontaneity of the methodology of the artist.

Lila Polenaki was born in 1964 in Athens. She studied painting in Berlin, where she lived until 2006. She currently lives and works in Athens. The materials she is using go beyond oil, fabric, lace and carbon to the use of papers of different quality and transparency. Distorted in time or marked from the human intervention all the materials are incorporated in her work and become part of a painting process in which the material imitates painting but also painting imitates the material. For the current show the artist will present a painting from her monochrome series of the mid-90s.

Yorgos Sapountzis was born in 1976 in Athens; he currently lives and works in Berlin. The multidimensional artistic practice of Yorgos Sapountzis explores the sculptures and statues in public space. He often takes public monuments as his starting point, objects that represent part of the collective memory, but also form the everyday experience of a city. The artist approaches sculpture with different strategies and through a variety of media: instable and easily transportable materials like aluminum, tape, colorful fabric, or newspapers, he ensnares and entangles the stone and bronze figures in his own narration.