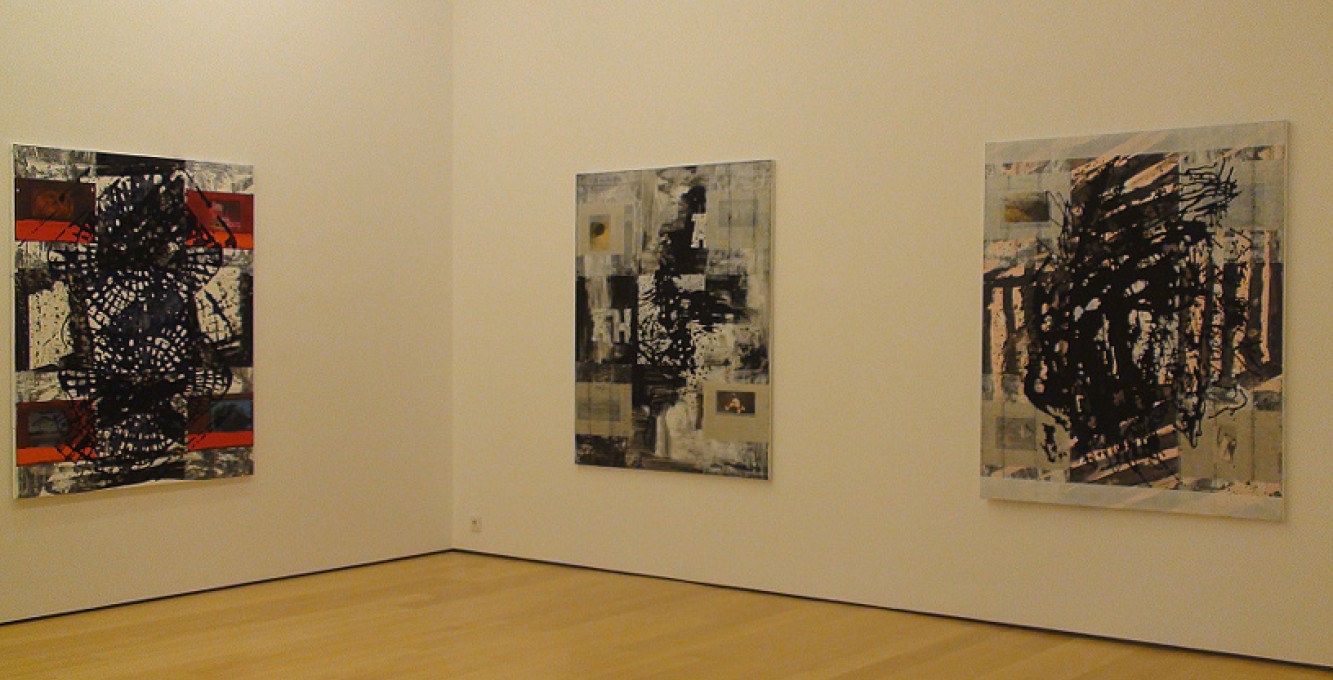 In the current exhibition the viewer confronts himself with seven artist’s positions. The artists with the use of different artistic mediums like painting, collage, drawings and sculpture, create a dialogue and effect on the viewer in a diverse sensual way. The title «Go Sinnlich» that means go sensuous encourages the viewer to follow.

Aidas Bareikis, after the tradition of artists such as Dieter Roth, is an archiver of thrown-away items. His constructions are made entirely of things found discarded on the street or purchased at ubiquitous 99-cent stores, flea markets and thrift shops. He chooses objects that “look weird but also betray a certain cruel exploitation in their purpose or in the way that they were manufactured”, Bareikis states. Humanity’s struggle with it’s history as it leaps into the future is a pervasive aspect of his work. The current show presents a series of solo portraits, drawn with black pencil on paper, that expresses the confrontation between self-awareness and alienation.

Yuzheng Cheng collects images from the flee- market, like old postcards from the 50s to the 70s with images from German landscapes as the Blackforest, etiquettes from consuming products, old family photographs, chooses photographs from newspapers and magazines and transforms them into painting. Therefore recedence, dissimilarity and uncertainty characterize Chengs’s works; every painting depicts a deformational necessity through its entry into the specific dimensions of the pictorial. Whilst Cheng breaks down the visual and brings it back into place in a transformed way he shatters all those things by the emptiness of their representation. He questions the elementary means of painting and in accordance with the pictorial his paintings enable a clearer view of the real world by turning it into a painterly reality.

Eirene Efstathiou investigates found images, as by-products, declarations, interpretations, and negations of the thing we call history. Her painting technique is deeply inspired by my source material, which ranges from, grainy home movies, to news photos, to film stills etc. Efstathiou is interested in the mediations created by mimicking this source material; She sees the inevitable breakdown that happens to the image as it undergoes so many transformations as a way to describe the mediations of memory and nostalgia. Cropping editing and finally painting from these images is meant to create a subjective space where the boundaries between these categories become blurred, a point from which she interrogates how we understand and reconstruct the past.

Thomas Helbig’s work evokes a dark, mythical, poetic, imaginary world. He incorporates objects found in dust bins and flea markets. Thrown away pieces of metal or wood become his canvases. In his paintings the figurative is dissolved into organic mysterious abstract images. The sculptures are also biomorphic abstractions. They incorporate figurative elements that seem to be in the process of being swallowed by the abject abyss of a Gothic fairy tale.

The main characteristic of Helmut Middendorf’s artistic development is that his work is polymorphic and is not limited in one concrete style. His art is generally based on the effort of inversion of stereotypes, in the search of new ways of expression, aiming at surprising both himself and the audience. Middendorf’s approach to painting moves in a field between objectivity and pure abstraction. He paints with several layers, abstract patterns and structures. He pours the paint, smears it, spreads it and uses paint rollers, all-over structures, projects images and responds to coincidental results.

Eftihis Patsourakis uses various materials (post-it papers, cigarette butt covers, photograph cuts, found photographs, pages of old photo albums) to produce art works in different media (Painting, photography, installation). His work explores issues like memory, the reflection of space and time, of the human gleam in space and the relationship between the physical, spiritual and social environment.
Creating small variations (through repetition, reflection, use of light) to his materials and their subject matter, his work creates new structures that subvert and redefine the prototypes and at the same time they question issues about society, culture and philosophy.

Lila Polenaki composes intensely colorful pictures, using acrylic, textile and paper and the technique of collage from material and pictures. Colorful textiles, reminiscent of a domestic space and female clothing, pieces of paper, notices and drawings, cut off from their main use, are incorporated having been elaborated on the painted surface. With virtuosity on the use of collage from a mass of disparate materials and a special, personal gesture, the artist composes the painted environment, which indwel gleams of female bodies, advertisement poses in deconstruction The painted surfaces direct in various versions roles and attitudes of the female hypostasis in relation to her history and the world.