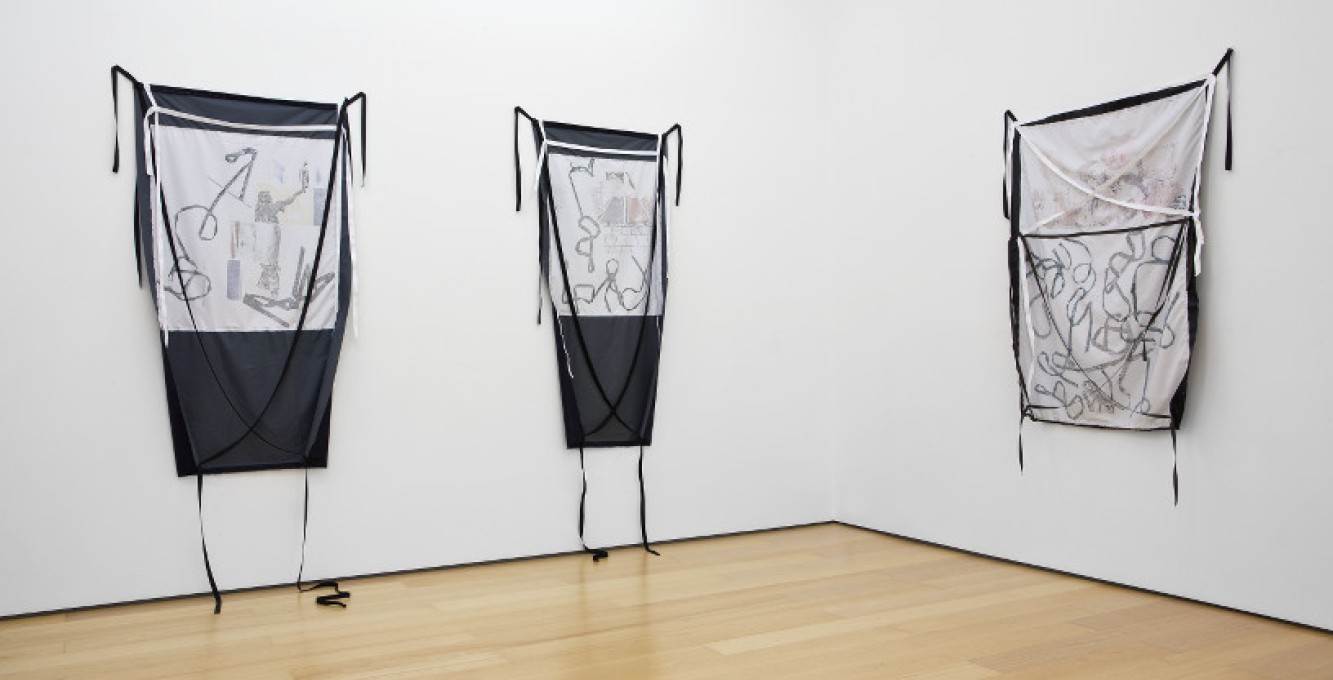 Eleni Koroneou Gallery is proud to present an exhibition of new works by three artists from the same generation Jessica Dickinson, Liam Everett and Yorgos Sapountzis.

Jessica Dickinson was born in 1975 in St. Paul (MA); she currently lives and works in New York. Dickinson works on small groups of paintings over a very long tome- as much as a year. Each is inspired by some chance observations or physical phenomenon, which, while it constitutes her starting point, will disappear as an image over the course of the painting’s fabrication. The delicacy, even the loss of the inspiring phenomenon is at odds with the almost overwhelming materiality of the finished work. For her paintings Dickinson uses wood panels. She begins by covering them with 10 layers of smoothed limestone polymer. She then proceeds to build layer upon layer of oil paint, sometimes mixed with wax. In the current show Dickinson will present a series of mixed media works on paper. Reflecting a similar process as the paintings, they are painted, marked, sanded, erased, built upon, carved into, and worked on top of each other and on both sides. These works offer an opportunity to trace elements that echo the meditative stages, passages of time, or chance actions that get absorbed into the paintings.

Liam Everett was born in 1973 in Rochester (NY); he currently lives and works in San Francisco. Everett's diverse practice encompasses painting, sculpture and performance, which reference multiple artistic influences including dance, theater, and philosophy. In one aspect of his practice, Everett makes paintings on Masonite panels, creating luminous abstractions through an elaborate process of layering and erasure. These works function at a different speed than his fabric paintings, which confound traditional methods of support. In these works, the fabrics are soaked, stained, dried and then carefully collapsed on various constructions that lean, cling to the wall and stand on the floor. Recent paintings on both free standing and shaped structures reflect the artist's interest in developing ways to expose the animate qualities of the still form and work with various sensibilities within the oeuvre. Everett's recent paintings are focused on what he refers to as "systems of support," in which the floor, wall and body are all implicated, collaborating within the mix of the visual dynamic. Everett uses non-traditional mediums such as salt, alcohol, and lemon, creating tension through limitations and at the same time entertaining the phenomenological and alchemical.

Yorgos Sapountzis was born 1976 in Athens; he currently lives and works in Berlin. The multidimensional artistic practice of Yorgos Sapountzis explores the sculptures and statues in public space. He often takes public monuments as he starting point, objects that represent part of the collective memory, but also form the everyday experience of a city. These sculptures become protagonists of the artists’ own performances, sculptures, installations, videos and collages. His choreographic performances, the fragile sculptural installations and the videos counterpose historical statues and monuments with his contemporary and subjective perspectives. Sapountzis approaches sculpture with different strategies and through a variety of media: The artist dances around, occupies, covers, or manipulates sculptures during performances often held at night. With instable and easily transportable materials like aluminum, tape, colorful fabric, or newspapers, Sapountzis ensnares and entangles the stone and bronze figures in his own narration; with elements from theatre and scenography Sapountzis presents the historical sculptures in new contexts.